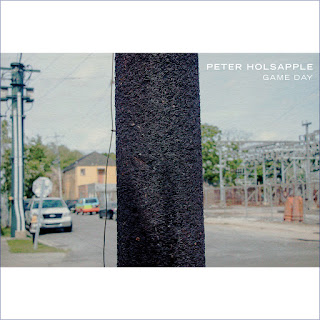 due July 27 from Omnivore Recordings

pre-order now to get a bonus 7" single
(bonus single is the 2017 release Don't Mention the War / Cinderella Style)
If you don't already own Peter's 1997 solo album Out of My Way, buy it here.

Here's what Peter says about the album at his blog:

I played almost every note on the record. I recorded and mixed it in my basement studio. I'm so far inside this record I'm breathing dryer lint. So any semblance of objectivity about it and its chances at being loved by the general populace is nil.

The best thing is I did the record all by myself (that may also be the worst thing I did), and it's absolutely the record I wanted to make. People will undoubtedly hear it and scratch their heads and say it sounds weird and eccentric, at least I hope so.


First solo album in 21 years from
the veteran musician and songwriter.

You would think being an integral member of one of the most beloved power pop bands, the dB’s, would be enough for a guy and his resumé. But no, Peter Holsapple just had to tour with R.E.M. and Hootie & The Blowfish, join Continental Drifters, and collaborate with John Hiatt, Indigo Girls, The Troggs, The Cowsills, Juliana Hatfield Three, Better Than Ezra, and so many others. Not one to rest on laurels, Peter has continually been in motion since his first recordings in 1972 with Rittenhouse Square.

Perhaps that’s why he’s releasing his first solo album in 21 years—he’s been a busy, busy man. And, as Peter himself says, “And it’s really ‘solo,’ too! I played and sang 99 44/100ths of the notes on this record. I wanted to be responsible for all of it, so I dove deep inside myself and the songs and came up with Game Day.”

Game Day contains 13 new tracks, a bonus track, and two “super bonus tracks”—Holsapple’s critically acclaimed single “Don’t Mention the War” b/w ”Cinderella Style,” originally released in 2017. “After putting the single out on my own last year, I made the decision to put out an album. Some tunes are brand new, some have been in rotation for a bit, but all are worthy. My ‘middle-aged Pet Sounds fantasy’ is real, with the issues of middle age put to memorable melodies. The old guy at work in ‘Tuff Day,’ watching my parents’ place get cleared out in ‘Inventory,’ a decades-late thank-you note to a college girlfriend in ‘Commonplace’—they’re all a part of the present-day me.”

Game Day is prime Holsapple, whose recording career spans nearly five decades. It contains all the hooks, clever lyrics, and deft instrumentation one would expect. As he paraphrases Jeff Beck in the packaging, “Today, with all of the hard competition in the music business, it’s almost impossible to come up with anything totally original. So I haven’t, but I had a lot of fun making Game Day, and I hope it comes through when you hear it.”