ROB SEZ: Two different recordings of this show have circulated in the past, but I am persuaded this is the superior-sounding version. I have re-tracked it and done some subtle eq work to bring out the best of this recording from a first-generation tape. Sincere thanks go to the original taper, dclubok for the original share, and edA for the re-up.

encores:
13. Everlasting Love
14. Get Down Tonight (Will Rigby vocal)
15. Let’s Live for Today

*see explanatory note about this song at THIS blog post

The dB's - 'Stands for deciBels' REVISITED


sound quality: variable, but none less than VG 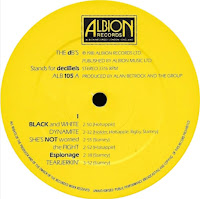 *Judy did not appear on the album as originally issued. It was first released on the “Judy” 7-inch single, and later added as a bonus track to some versions of “Stands for deciBels.”

ROB SEZ: I had a great time putting this one together. The main inspiration is a special share from lilpanda (thanks, man). It's a collection of tracks tagged “Pre-Signing Demos”. However, after listening to them many times over, I came to realize they sounded a lot like the finished masters for Stands for deciBels, but with interesting differences. Certain instrumental passages I was hearing in these versions aren’t on the masters, or have sounds that are much less prominent in the final mixes.*

I decided the collection was probably from a work-in-progress production cassette, created as the debut was being recorded. It’s not uncommon for artists and producers to create collections of rough mixes before final mixing and mastering. I’m guessing this passed from a friend to a friend, etc., until it was eventually shared with other fans. Some versions in the collection sound so much like the masters that I chose not to include them here. (One, a great demo of “Dynamite,” was released later on Ride the Wild Tom Tom -- so go listen to it there). For the live versions, I tried to pick tracks that married good sound quality with a great and/or aurally interesting performance. The live tracks are effective reminders how amazing Will and Gene are as The dB's rhythm section. They are the group's secret weapon and unsung heroes...
Stands for deciBels was released in January 1981
— almost 40 years ago!
*Geeky observations about the alternate studio mixes,
for fellow obsessives:

1. BLACK AND WHITE - You can hear the difference right off the bat in the extra reverb on the vocals and the prominence of the electronic (?) hand claps from the opening notes. In the master, however, the hand claps fade in & out, alternating with an additional double-time percussion part, like a fast-ticking watch. In the master, the acoustic guitar track is much more prominent in the mix (I'm not sure it's there at all in the alt. mix). There are other differences you can find, in this & the other alt. mixes. For example, there's a tambourine part beginning in the alt. mix version at 2:38 that lasts about 15 seconds. It's not in the master mix, which instead has Will thrashing away on the cymbals in the same part of the song.

6. TEARJERKIN' - The difference between this alt. version & the master lies in which instruments are emphasized in which mix. One example: the main keyboard part is less prominent in this one than on the master, where the keyboard's edgy tone is put in the foreground. You can also hear it in the bridge starting at the 3:00 mark: in the master, there are added sound effects missing from this version.

8.  BAD REPUTATION - Like some other alt. mixes in the "Pre-Signing Demos" collection, this one's differences present themselves after repeated A-B comparisons to the master version. Some differences lie in the mix, which has less reverb overall in the master version. The rhythm guitar part is much more prominent in the master as well. Other distinctions are more immediate, such as the guitar solo at 2:18. There's one in the same spot on the master, but a different take is used instead of the solo featured here.

10. I'M IN LOVE - The biggest difference between this alt. mix and the master can be heard in the bass lines. In this version, it's a standard electric bass sound throughout the track (albeit played with Gene's incredible technique). In the master, however, the familiar bass sound is rarely heard. Instead, a rhythmic bass part played on (what sounds like) a keyboard is heard on most of the track. Also, a squealing electric guitar line is heard in the background at several points in this version, but very little on the master.

11. MOVING IN YOUR SLEEP - This one has very subtle and hard-to-detect differences. You can hear them mainly in the bass parts (some later sections were re-done for the master) and the mix (the acoustic guitar is far more prominent in the master than in this alt. mix). Almost didn't use this one, but then I realized The dB's never seemed to have played this song live (at least before 1988) — so here ya go!


Critics have noted Stands for deciBels stood the test of time, and today is considered a classic. One of the big reasons for its well-deserved reputation can be found in these alt. versions: at nearly every point when additional parts or sounds were considered for the debut album, the band and their collaborators chose the more classical path, shunning trendy "New Wave" techniques and effects.

Chicago, IL
July 2, 1986
audience recording (sound quality VG++; transfer from first-generation tape source; virtually no bothersome crowd noise; this one sounds so good, I almost rated it Ex-)
ROB SEZ: At first, I didn’t consider this show for the blog because it’s one of the more common ones. Silly me. After actually listening to it, I can hear it’s one of the best shows around, combining a great performance and very good sound. Massive thanks to to the taper and to john52il for sharing. 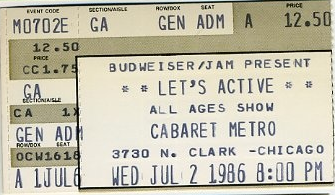