The dB's 'New Music' Pre-Falling Off the Sky

Falling Off the Sky is not the only music
The dB's have been creating since they
first reunited several years ago.
Here's a dB's Repercussion Blog primer
to what has preceded the new album: 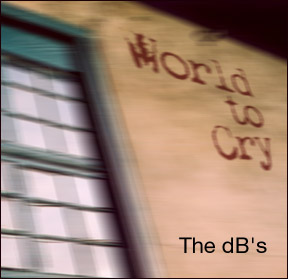 From the band's web site:

The dB's Online is proud to debut this all new, 2005 studio recording by The dB's. "World to Cry" is a Peter Holsapple composition, recorded January 2005 at Water Music in Hoboken, mixed by Chris Stamey at Modern Recording in Chapel Hill, and featuring Peter, Chris, Will Rigby, and Gene Holder.Written by Peter Holsapple © 2005 Hospital Music (BMI) administered by Bug.

"World to Cry" is track 7 on Falling Off the Sky.
The album mix is said to be slightly different than the single.

Here’s what Peter posted at The dB’s online messageboard 7/29/2005:
“Originally, when faced with the prospect of a reformation of the dB's, I had thought that I would not be able to write in a similar style to the original band's; ten years with the Continental Drifters can do that to a body. I certainly didn't consciously write "World to Cry" with the deeBs in mind. When Chris heard the demo I'd done, he thought it would work with him and Will and Gene playing it (which I also think it does). It gave us confidence that we could play together again and try other new stuff. So really, we did it as a starting place. Please know that we will try to exhaust our creative juices on this album. None of us are into this as an oldies new wave vaudeville show (too much of that going on already). Nor is the new album going to be Repercussion Part Two. We plan on moving forward like the world does. Just needed a place to start...” 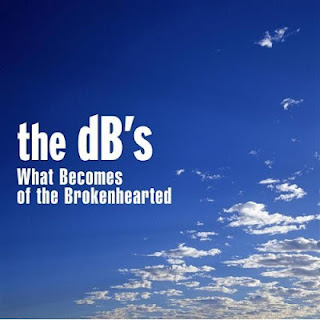 Band press release:
The dB's are offering their newly recorded, previously unreleased version of the Motown classic "What Becomes of the Broken Hearted" to help raise money for the displaced musicians of New Orleans.

Hurricane Katrina is a disaster of such epic proportions that it would be pretentious to write about in the context of the website for a rock band. Suffice it to say that New Orleans IS the home of American music. Period. Not "was," either.

Not one but two members of The dB's have been made homeless by Katrina. Peter Holsapple and his family are fine, but their home is almost certainly beyond salvaging. Jeff Beninato is also fine but had to evacuate; his second-floor apartment may or may not have escaped damage, he doesn't know yet (and may not for a long time).

They don't need immediate financial help, but many New Orleans musicians do. Jeff Beninato met with some great people at Chase Bank in Chicago and, in conjunction with New Orleans Director of Music Development Scott Aiges, has set up the New Orleans Musicians Relief Fund. Donations to the fund will go directly toward getting struggling musical artists back on their feet. It will provide money for food and shelter to those without, and hopefully replace musical equipment that was lost.

Peter Holsapple says: " 'What Becomes of the Brokenhearted' ... is still my favorite vocal that I’ve ever recorded on anything. I’m so proud of that. I think I pulled out all the Richard Manuel stuff I could manage. I tried to be as soulful as I possibly could without turning into Eddie Hinton." (to Alex Rawls via MySpiltMilk.Com)

The "Picture Sleeve / Write Back" single was released on Record Store Day in 2011. It's a historic little piece of vinyl because it's the first actual (physical) new single by The dB's original lineup in 30 years. It's historic for one other reason: "Picture Sleeve" is one of very few dB's songs co-written by Peter and Chris. No turntable required: the single included a download card allowing purchasers a one-time online digital download of both tracks.


"Picture Sleeve" does not appear on Falling Off the Sky
(except as a digital download when you buy the vinyl LP).
"Write Back" is track 4 on Falling off the Sky.


RELEASE 4
"Revolution of the Mind"
free online download at The dB's ReverbNation page
plus 2 videos posted online
offered in tribute to the Occupy movement
October 2011
As of Record Store Day 2013, "RotM" now appears on a limited-edition EP
with 3 previously-unreleased tracks. More info HERE and HERE.

CHAPEL HILL, N.C. — The dB's will release a new song, "Revolution of the Mind," for free download at http://www.thedbs.com. The high-energy rock track was recorded by Peter Holsapple, Gene Holder, Will Rigby, and Chris Stamey during sessions for the band's new album, Falling Off the Sky, due in spring of 2012, and includes additional "revolutionary" guitar by Ira Kaplan (Yo La Tengo) and background vocals by Django Haskins (The Old Ceremony).

“The MC5 played in our hometown of Winston-Salem, NC, in 1971,” Stamey related, with a nod to the timely track’s sonic and political inspiration, “and none of us were ever the same again.”

The band is best known for its critically hailed proto-indie pop 80s albums Stands for deciBels and Repercussion. Due to conflicting geography, work and tour schedules, the reunited quartet has taken its time but has finally completed the new album, Falling Off the Sky. It will be worth the wait. But for now, the nonalbum track “Revolution of the Mind” should serve as an appetizer.

Two NC-based artists have been inspired by recent events to create videos for the song, also available from the band's site: one by Jerry Stifelman of Creato Destructo Imagery and the other by Greg Parsons (editor) and Mike Allen (director).


WATCH the ALLEN/PARSON VERSION OF THE VIDEO.

"Revolution of the Mind" does not appear on Falling Off the Sky (except as a digital download when you buy the vinyl LP).

The lineup for this recording is:
Peter Holsapple Will Rigby Gene Holder Chris Stamey with Django Haskins (bkg vcl) - from The Old Ceremony and Ira Kaplan (“revolutionary” electric guitar) - from Yo La Tengo

What kind of revolution would you like to start?

Tell me three things that you want to see change
What do you think can't afford to stay the same?
Revolution of the mind--is it really that strange?

What sort of revolution will you have today?
Tea bag bullshit set to take your rights away
People gotta rise to meet it, get together if we're gonna beat it

What is it gonna take to get you out of the mall?
Can't sit around and wait to get these problems solved.
Put down your shiny new phone, this revolution's gotta start at home.

Buying a Chevrolet is not a revolutionary act
Nor is sweeping with a Bissell sweeper, as a matter of fact
People gotta rise together, if we're gonna make it last forever

This is pretty special — the mighty dB's, in full-on MC5 mode, with a new song, "Revolution of the Mind." It's synched with riveting Occupy Wall Street images as well as sundry other timely and occasionally quirky clips (many are from an earlier generation's protests, and keep your eyes peeled for vintage cartoon footage too).

One version of the video was done by Jerry Stifelman and Creato Destructro, while the other is by director Mike Allen and editor Greg Parsons. The song features — in addition to The dB's: Chris Stamey, Peter Holsapple, Will Rigby and Gene Holder — Ira Kaplan from Yo La Tengo and Django Haskins of the Old Ceremony.

Incidentally, the band has a new album finally set to drop: Falling Off the Sky, produced by the dB's along with Scott Litt and Mitch Easter, is due in early 2012. If you go to the official dB's website you can nab a free MP3 of the song.


The dB's Thrown In for the Revolution

“Revolution of the Mind,” the new song from influential and underrated indie rock progenitors the dB's, does not sound like the work of a band that hasn't released new music since 1994. The tune, the band's first since the “classic” line-up began playing together again in 2005, is a burst of pop-rock energy with punk overtones and a rebellious message.
A leftover from the sessions for Falling Off the Sky, the band's forthcoming 2012 reunion album, the Peter Holsapple-fronted track rides a guitar lick that mimics a European police siren. It ricochets off of rock-solid bass and a backdrop chug of drums and rhythm guitar. Holsapple challenges modern notions of security, lashing out at his fellow 40-somethings for losing the revolutionary vigor of their youth: “Buying a Chevrolet is not a revolutionary act,” he taunts. An all-star effort by both local and national standards, the song features supplementary guitar work from Yo La Tango's Ira Kaplan and background vocals from The Old Ceremony's Django Haskins.
Feeding off the times, the band released the song in solidarity with the Occupy Wall Street movement. One of the song’s two music videos is directly tied to the spirit of the protest. Directed by Raleigh's Mike Allen, the clip splices footage of the occupation with other defiant acts, both fictional and historical, and a curiously placed black-and-white cartoon.
“The OWS movement, and similar movements throughout the country and the world, implies to me that, when something is wrong, you can't sit around wringing your hands and hoping for someone to activate change,” Holsapple says. “You have to take the matter into your own hands and make it happen yourself. Hopefully, as with OWS, you will find like-minded individuals who can add to your number, and with that burgeoning number you can feel a certain amount of strength that what you are doing is valid and right and important.”