Cotton Mather - Live On the Radio 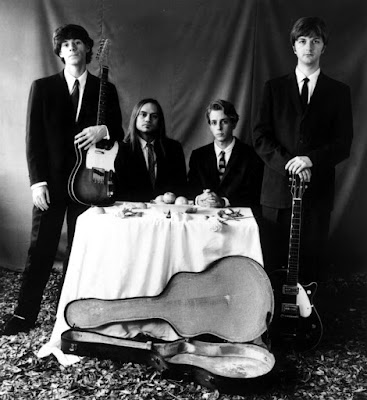 FM recordings (sound quality VG to VG++; UK recordings are probably FM captures; 2002 set could be from a web stream)

NOTES:
01-07 = GLR - BBC 1999 set
09-18 = Los Conciertos de Radio 3 (2002)
*08 = band interview with BBC's Gary Crowley after the release of The Big Picture, c. 2002. The three live songs are Baby Freeze Queen, 40 Watt Solution & Panama Slides. There’s a signal drift problem that crops up about halfway through, but you can ignore it if you try.
For those who pay attention to such things, the two UK live tracks from the Kontiki-era singles are not included herein. Haper compiled those and other Cotton Mather goodies over at Popfair (HERE & HERE).


ROB SEZ: Regular readers of this blog know we love to celebrate lesser-known groups worth hearing, especially those with a Beatlesque bent. Cotton Mather is right in line, sporting inventive melodies, sharp lyrics & frontman Robert Harrison's uncanny Lennon-esque vocal style. Cotton Mather went by the boards in 2003 so Harrison could regroup and re-think his musical direction. He emerged in 2007 with the Future Clouds & Radar collaborative. But Cotton Mather reunited occasionally for live shows and, just last year, released Death of the Cool, an album of all-new studio material. The band even played a couple of times this week at SxSW. Check the sample & enjoy. THIS POST IS DEDICATED TO NICK, who kindly supplied the rare stuff you're about to enjoy. If you can find it, there's also a bonus mystery share somewhere around here...
MP3
1999 set = MP3@320 kbps (band interview @192)
2002 set = MP3@VBR (med. bit rate)