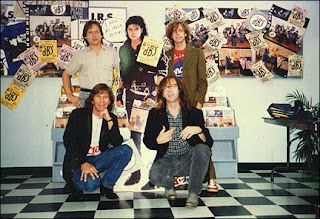 ROB SEZ: This one's got great energy, and the sound quality makes a big jump for the better by the end of track 2. I don't have much more to say about this one, except "BIG THANKS" to Gene Poole and elegymart for their generosity. (Check out elegymart's notes for this recording, below.) People like Gene & elegymart are the unsung heroes for those of us who love this music. Why not leave a comment now to say "Thanks"?

This time we take you to a late Friday night show at the Ritz for a set from the dB's. The Go-Betweens and Dash Rip Rock were also on the bill. Tickets were $13.50.

The show finds the band near the end of their first run, before they disbanded in early 1988. This Toyota minivan tour started in September, and after performing a few more dates around this time, they would take over the opening slot from 10,000 Maniacs on R.E.M.'s fall U.S. tour for pretty much the remainder of the year. Peter would later put in a four-year stint as a full-fledged R.E.M. sideman. Also don't ever forget the factoid that they were all label mates with Holly Robinson from "21 Jump Street" back then.

For this set, the dB's as a freshly minted signing from I.R.S. (rescued from the deadweight status of Bearsville) are primarily pushing their latest label release "The Sound of Music," which had been kicking around for about two months at this point, although it had temporarily gone out of print while the label was busily focused on keeping up with the demand to continuing pressing R.E.M.'s excessively popular "Document." Other than "Living a Lie" off Repercussion and the standard closing Elvis cover, the rest of the set are selections from Like This and The Sound of Music. We've got Harold Kelt here on keyboards and additional guitar, doing double duty to take the place of Eddie Muñoz who didn't quite work out after the band's attempt to replace Gene Holder, who had amicably parted to worked with the Wygals full-time. By the end of the tour and before December rolled around, Peter and Will decided Harold's brief gig with the dB's should be consigned to history as well.

This is a short set probably due to the time of the show, with three bands on a 11PM start time. If Gene taped the other two sets, hopefully he'll find them soon. As with most of his collection, he did not have the exact date noted on this cassette, just "same week as Zevon" noted (technically not the same week, but same weekend, yes: see Vols. 5 & 6). Thanks to gv0000 and john234 always at the ready with their lightning-fast research, the exact date was sussed out.

Gene flubs the recording levels at the start of the first song, and there's a significant chunk missing on the tape flip. Ironically "Sharon" — a CD bonus track, back when people had to be enticed to buy CDs versus vinyl, before they became popular reigning media and before the world then reverted back to vinyl worship again — gets atrophied, as does the beginning of "Suspicious Minds." The sound of the music though is primo, the drums and instrumentation along with the vocals all in fine balance.