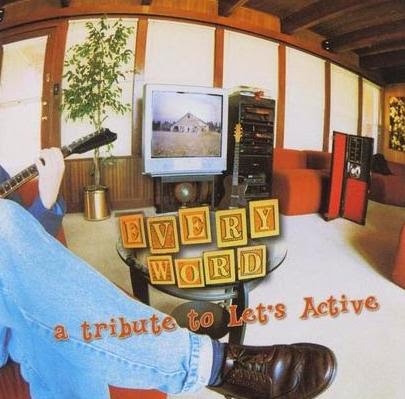 REPERCUSSION: Michael was the instigator/compiler/co-producer of the fabulous Let's  Active tribute album, Every Word (which you already own, right?).

Notes from Michael Slawter about these tracks:

01 What She Wants (outtake) - Recorded for Outside Guiding Lights (by The Saving Graces). It wasn't completed because it was decided it was too heavy for the record. I finished it in my home studio. This eventually ended up being recorded by Slawterhaus 5.

02 The Harbour Song (outtake) - Recorded for An Assassination of Someone You Knew, but left off because it just didn't fit. No one liked the telephone except me. The guitar solo is Jerry Chapman.

03 Before You Left (Solid State EP) - I always liked this version. Jamie Hoover changed the bass line and I re-recorded the riff on 12-string for the Assassination version. Real drums were added as well.

04 The Passion of the Stars (Solid State EP) - This demo sounds more powerful than the final. Funny that. We used almost all of this on the final, just added real drums.

05 I Believe (Pulltoy "produced" version) - This was Chris Myers - Bass, Myself - Guitar and Rich Rothermel - Drums. What I refer to as my first real Power Pop song. We'd done a live rehearsal release for mp3.com and the engineer David Roland wanted to re-record a few songs. We brought in Jerry Chapman (Two Pound Planet) to produce. Pulltoy was the band that became Neidermeyer. Rich Rothermel mysteriously passed away not long after this recording. Chris and I got together with Art Gormley (guitar) and Scot Mejan (drums) to just goof around to celebrate Rich and the band was formed. The FOR THOSE ABOUT TO POP (Neidermeyer) album is dedicated to Rich.

06 Astronaut (Pulltoy "produced" version) - Another song from this session. You can hear Rich singing the high part on "President". Jerry and Chris are singing the other background parts and Jerry played tambourine I believe. I made two failed attempts at re-recording this song. This one always leaves a lump in my throat.

07 Girl Automatic (live) - Probably the best live version of this song. We always had a problem getting it right live. The crowd response at the end was little jarring. I was not expecting that.

08 The Things That Make You Strange (live) - My attempt at a Nuggets-style 60's rave up.

09 I Belong to the Jetset World (live) - A song that would eventually end up on Outside Guiding Lights. This lineup would play steady for over a year then record live at Jamie Hoover's studio for OGL.

10 What She Wants (live) - This was always our closer. This eventually ended up being recorded by Slawterhaus 5. Sorry about the F-bomb. I was just very excited.

11 Ever Fallen In Love (live) - I've always been a huge Buzzcocks fan, though Magazine has had a more lasting effect.

12 Any Other Way (Posies cover) - Recorded for The Posies tribute but was not chosen?!?! John Holoman - Drums, Myself - Everything Else.

13 Beth (Kiss cover) - Recorded for the About A Girl tribute. Ended up on a bonus CD. Always the bridesmaid. This is myself and Jamie Hoover. All the strings are from a Proteus II (which is what Andy Partridge used on the Apple Venus record). I tried to contact Peter Criss and Gene Simmons. I didn't hear back from either of them.