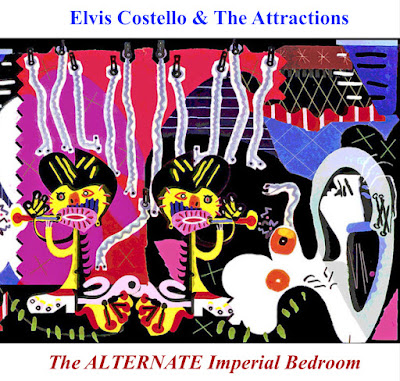 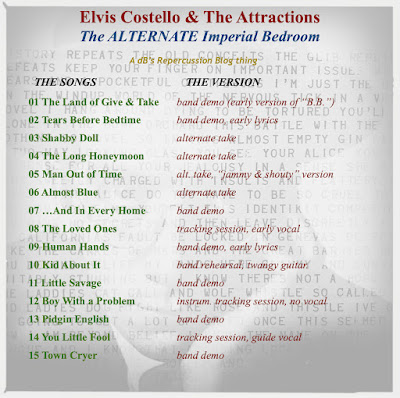 ROB SEZ: Continuing my celebration of this amazing album's 40th anniversary, following last week's live version of the album. This week, I'm offering a companion album comprised of band demos, outtakes, and alternate takes from the album recording sessions. Think of this as the "trainspotter" version of the album for EC geeks — like me! As with the live version, I sequenced the tracks in the same order as the original album. (Once again, there's nothing here that's ever been officially released on any version of the album.) This gives you a chance to marvel at the early ideas, lyrics, and band contributions as heard in the demos. And it lets you enjoy the more evolved outtakes and alternates — recorded just a few months later when EC & The Attractions arrived at Air Studios to create their masterpiece. Wait 'til the end for the mystery bonus track: definitely worth waiting for. Comments? Yes, please.
SOURCES: Based on available information, I assume the band demos were recorded in August 1981 at Pathway Studioes in Islington, with the outtakes and alternate takes recorded in November 1981 at Air Studios in London during album sessions. Where exactly did these precious rarities come from? I won't ever say, since it would betray my sources. My music-sharing companions know who they are, and I'm forever in their debt. I received these as high-quality MP3s, which explains why there's no lossless share this time.
MP3@320
P.S. - Track 05 in this compilation bears a resemblance to the "Alternate Version" found on the bonus disc of the 2002 reissue, particulary in its tempo. Upon careful listening, however, you'll notice there's a second distinct vocal line in the version included here, plus it lacks the keyboard overdub that can be heard on the officially-released "Alternate Version." The version in this compilation is an alternate mix with an added vocal part that makes for a distinctly different version of the song.
Posted by Rob-in-Brevard