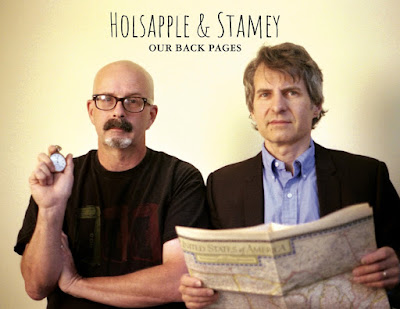 ROB SEZ: Think of this as "Holsapple-Stamey: The Unplugged Duo-ver Collection." I heard some of these tracks when they slipped out sideways in 2009, around the time Peter & Chris released their second duo album, hERE and nOW. They are completely enjoyable versions of dB's favorites and a few rarities, such as an early acoustic version of "Picture Sleeve" (later released in full band splendor on Falling Off the Sky), a duo version of Chris' song "Depth of Field," and all the dB's playing together on the rare 2005 version of "Nothing Is Wrong" with Chris on lead vocals. KUDOS to Chris, Peter and Ominvore Recordings for getting this out. Now then: what are you waiting for? 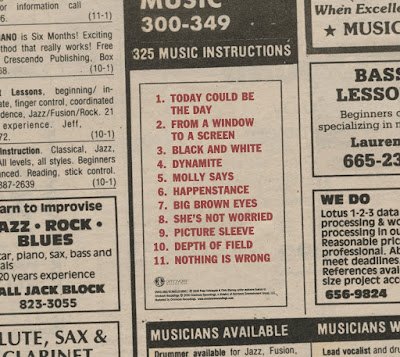 BUYING RECOMMENDATION: This is a digital-only release. As much as I appreciate & respect Omnivore Recordings, I am truly disappointed they charge full freight for lossy MP3s. (C'mon, Cheryl & co — I know you can do better!) So I recommend you find other sources for authorized, legit lossless files. These songs sounds great in hi-res 24-bit files, available HERE and HERE.

Chris and I recorded a bunch of our old songs from The dB's in our duo format, as we'd been playing them in our shows for years. A lighter touch, less early adult angst and more gentle harmonies, acoustic guitars and space for the songs to breathe. Chris mixed these tunes and we presented them to Omnivore for their support of MusiCares.

Our Back Pages is an easy record to enjoy at home, and if you purchase it online (the only way to get it presently), you will help us benefit MusiCares COVID-19 fund that assists musicians affected by the pandemic's scope. Here's the link to purchase it via Omnivore Recordings, but it's available on almost every platform there is. And here's the MusiCares link if you want to bypass the record completely and just make a donation.

Thanks for your patience here, and I hope you order OBP for some weekend sounds.

P.S. — I have a new Facebook artist page which has replaced the old one. So please 'like' me here

And here's the press release from Omnivore: 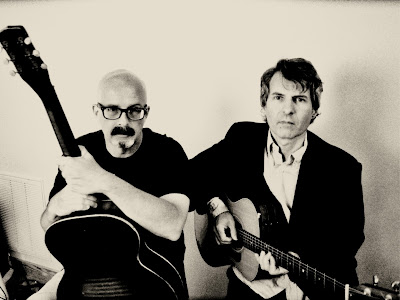 The MusiCares Fund is the Recording Academy’s charitable foundation provides a safety net of critical assistance for music people in time of need.

Our Back Pages is a digital-only release of dB’s music re-imagined by the band’s Peter Holsapple and Chris Stamey. The collection, featuring new acoustic versions of some of the duo’s favorite dB’s songs, will benefit the Recording Academy’s MusiCares COVID-19 Relief Fund.

Chris Stamey explains, “Over the years, Peter and I have evolved acoustic versions of a number of our songs from our days together in The dB’s. While working on a duo project in my studio a decade ago, we took some time to lay down some of these arrangements, which are often quite different from the normal electric presentations. We are both always more concerned with making new music than with looking back, so it stayed in the archives. But it seemed like the time was right, so we finally completed and mixed it all over the last two weeks, just for this. We’d like to offer it now as a small contribution, a little bit of light in these dark days.”

Signature dB’s songs, including “Black And White,” “Big Brown Eyes,” and “Happenstance,” are ably propelled here by lyric and guitar energy alone, and the hooks remain—it’s easy to find one’s self singing along. Tunes such as “Dynamite” and “From a Window to a Screen” are revealed as precursors to the music the two made together later, as they feature “dual lead,” close-harmony vocals as essential elements. Others, such as Peter’s “Today Could Be The Day” and “Molly Says,” were originally recorded by the band after Stamey’s departure, so this marks the first time he’s gone on record with them. When going through the material in preparation for mastering, they even discovered a forgotten track, “Depth Of Field,” and completed it for this release; although a version had appeared on a Stamey solo record, it fits in here because it was originally written and rehearsed contemporaneously with the rest for The dB’s’ second album, Repercussion.

Another song, “Picture Sleeve,” is both old and new. A song by this title was in the band’s sets circa 1978, but all that anyone could remember, years later, were the first few lines, some chords, and the subject matter. Using those elements as a jumping-off point, it was rewritten for a Record Store Day single release three decades later, and a duo version is part of this release. Peter’s classic ballad “Nothing Is Wrong,” a staple of their live duo sets, was overlooked during the original sessions and sadly missed. Fortunately, it’s included on this new collection in a version The dB’s themselves recorded during a rehearsal in Hoboken, New Jersey in 2006.

“We’re still proud of the electric versions of the songs,” Stamey insists, “but a sturdy song should be able to handle a bit of reinvention from time to time, and it was fun to get under the hood and see what was there even without the charm and power of Will Rigby’s explosive drums and Gene Holder’s nimble bass runs. In most cases, it’s a trip back in time to the songs’ origins of being written on acoustic guitars in apartments or hotels, then strummed to the others in much the same way these recordings sound now.” Peter adds, “These stripped-down versions add a credence to our belief that a truly good song can stand up without a lot of bells and whistles.”

A few special guests joined Holsapple and Stamey on the sessions: John Teer (Chatham County Line) and Libby Rodenbough (Mipso) both contribute violin, and Andy Burton (Little Steven, John Mayer, Cyndi Lauper) plays keys on “Nothing Is Wrong” with, of course, Rigby (drums) and Holder (bass). The mastering by Greg Calbi and Steve Fallone at Sterling Sound is a homecoming of sorts as legendary mastering engineer Calbi had previously mastered the pair’s influential Mavericks outing as well as Falling Off the Sky, the last dB’s album. For the most part, it’s Peter and Chris around the campfire at Modern Recording in Chapel Hill, N.C., grabbing whatever was in the room at the time: a toy piano, a ukulele, a banjo, a harmonium, an upright or an old Silvertone bass, and of course, guitars, guitars, guitars.

In addition to 1991’s Mavericks (RNA Records), Holsapple and Stamey also paired up for 2009’s hERE & nOW (Bar/None). For more insight into the genesis of some of these songs, see A Spy In the House of Loud: New York Songs and Stories (University of Texas Press), Stamey’s 2018 “songwriting memoir.” Be on the lookout for A Brand-New Shade of Blue, Chris’s new audio-and-songbook collection, currently slated for a summer 2020 release.

From Omnivore Recordings’ Cheryl Pawelski: “Omnivore is grateful to the mastering engineers, graphic artists, photographers, and all who enthusiastically gave of their time and talent to help realize these projects. MusiCares has always been an important safety net for our music community, perhaps never more so than now. We are fortunate to call Chris, Peter our friends, and proud to assist them in getting this music released in support of the MusiCares COVID–19 Relief Fund.”

DONATE, HERE'S WHY:
MusiCares provides a safety net of critical assistance for music people in time of need. The COVID-19 Relief Fund has been established to help our peers in the music community affected by the Coronavirus pandemic. Proceeds from these two projects will be directed to the COVID-19 Relief Fund.