audience recording (sound quality: VG+; great capture by Mark Albers — it sounds like you're right there) 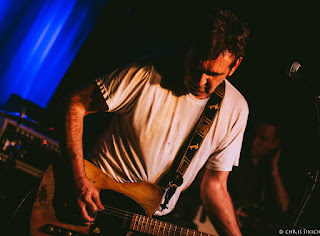 ROB SEZ: Damn! I still really miss Tommy Keene and the thought of sharing the same planet with him. I never met the guy, and never got the chance to hear him play in person. But what a blazingly talented songwriter and guitar player he was. And those who knew him say he was a genuinely kind human being. Tommy never failed to move me with his incredible playing and heart-in-his-gut singing. I was feeling all this (again) the other day, when I thought: "What if I could find a great live recording to bring TK a little closer?" Lo and behold, I found this gem: recorded by Mark Albers at a house concert Tommy played in Wisconsin in 2014. The small venue, the acoustics, the audience vibe and TK's magic all come together to make for a great show. Everyone in attendance must've thought so too, because Kiki had him back the following year — thus, the 2015 bonus tracks. Check the sample, and I bet you'll be downloading it shortly thereafter. A VERY SPECIAL THANKS to Chris Sikich for permission to use his fab photos of Tommy Keene. Chris has photographed lots of the artists we love at this blog, so go check out his web site & Flickr feed for more.