Falling Off the Sky on Vinyl - mini review 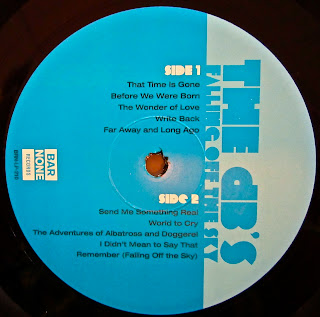 BONUS TRACKS accessible by download card in the vinyl package:


1. Revolution of the Mind
2. Picture Sleeve
3. The Instrumental Adventures of Albatross and Doggerel
4. The Wonder of Love (Ian Schreier Radio Remix)
5. Before We Were Born (Scott Litt "T Rex" Mix)

SO VERY COOL to have the new album on 180-gram vinyl. "Old school is the best school," I thought to myself as I unwrapped the box — and this coming from someone without a working turntable! (I hope to get mine fixed soon or borrow a friend's so I can hear how the LP sounds.)

Did someone say "value for money"?!? For a little under $20, you get the LP, the album art in the "correct" size, a great-looking inner sleeve with full album credits and color photos, the 12-track CD in a cardboard sleeve, and a card with a unique code. Go online to Bar-None's web site, click the Downloads tab at the top, and you'll be taken to a screen where you'll be asked for the code. Type it in, hit the "Get Your Music" button, and after a few seconds' wait, you'll have the 5 bonus tracks, all in high-quality MP3 (@320 kbps).

And what about those bonus tracks? Well, you've probably heard at least a couple of 'em already. There's nothing very surprising to be heard, but I must admit I'm glad to have them. The first 3 previously-released tracks sound great in high-quality sound (for example, most folks have only heard "Revolution of the Mind" in the lower-quality version released via the band's web site).

To my ears, the mixes for Tracks 1 and 2 sound slightly different than those previously released. In particular, the backing vocals on "Revolution" sound more prominent in this mix, which I prefer to the original. I missed the earlier release of Track 3, "The Instrumental Adventures of Albatross and Doggerel," which at one point was available as a free download on the band's web site. But it may be the best of the bunch. As much as I love the album version, this one removes the lead vocals so you can better enjoy the song's musical dynamics and instrumental interplay. Worth repeated listening.

And what about those final two remixes? Well ... they're cool to have, as I said. But they're not the radical remixes or revisionings of the songs that some might have hoped for. You do hear some extra brass riffs on the Ian Schreier remix of "The Wonder of Love." And Scott Litt used extra reverb on Chris' vocals for the T-Rex Mix of "Before We Were Born." Otherwise, they sound a lot like the album versions. I can imagine, however, that someone out there might like them better than the master versions.

Bottom line? If you've been hesitating to spring for the LP release of Falling Off the Sky, you shouldn't wait any longer. Think of all the ephemeral and disposable stuff you spend $20 or more on and tell yourself the truth, "This week, I'd rather spend it on the vinyl edition of one of the greatest alt-pop albums released in recent memory."

Email ThisBlogThis!Share to TwitterShare to FacebookShare to Pinterest
Labels: Falling Off the Sky, The dB's, The dBs